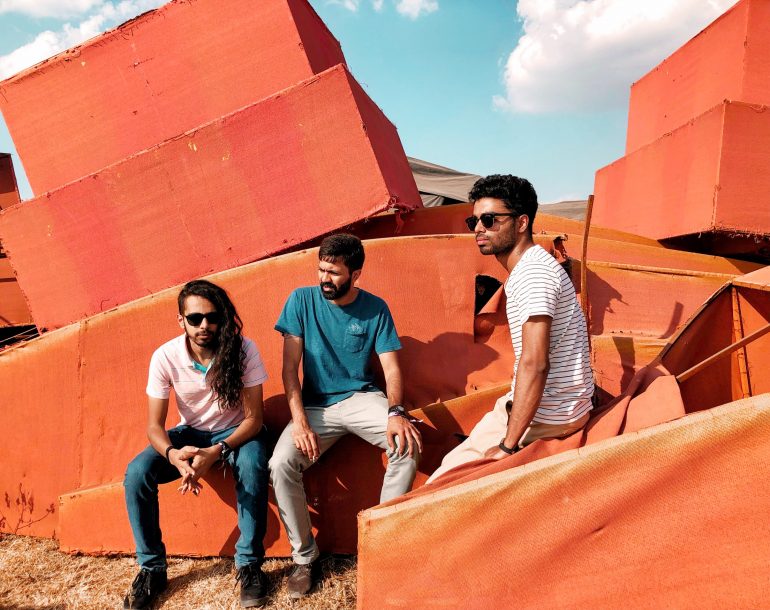 Cinema of Excess, a Bangalore-based trio who make acoustic folk music, reminds you of the best parts of belonging to a family. The effortless camaraderie between them definitely preceded the inception of what is by all metrics a very young project. The band’s formation was a serendipitous affair when guitarist, singer and songwriter Anirudh Ravi met guitarist Bharath Kashyap and bassist Abheet Anand three years ago.

The trio have managed to take the centuries-old sound of two acoustic guitars and a bass, breathe new life into it and push it in exciting new directions. Their chemistry as a united front has only deepened with time. This is exemplified in the growing complexity and depth of their music with every new release.

Their latest single, ‘Mighty Angel’ which came out in August this year, features more complex movements, lavish melodies and heartwarming lyrics. This single, however, seems like the calm before the storm. The follow-up to their spectacular debut, Bring Back The Sound, is a 6-track EP named Rooftops and is slated for a release in the coming months.

“Honest art will find its way no matter what” is a mantra that Anirudh swears by. Although the batch of songs on their debut EP, Bring Back The Sound were primarily based on material by Anirudh, the band has come a long way since. After playing with each other for so long, each member knows how the other two approach music and hence, the whole is far greater than the sum of its parts.

Although they have a large batch of songs waiting to see the light of day, the band insist on taking their time to “season the songs”. These unreleased songs are added to their live setlist and mature organically over multiple live renditions. “We were not expecting a lot of people to show up at the venue but the crowd was packed. What’s even crazier is that they were humming along to our unreleased tracks,” Bharath fondly recalls their surreal experience at NH7 Weekender. By the time the rest of us get to listen to their songs, they have already memorized each other’s parts and the finished product is the best possible version of what it could be.

Every body of work that they put out is a reflection of where they are at as a band at that point. Anirudh talks about how Bring Back The Sound was predicated on his feelings about a particular romantic interest and the sound just came out from his thoughts and feelings. Rooftops looks like it follows a similar vein, being a snapshot of their chemistry as a group and their changed perspectives as a band.

“Music is an art form and we are in it for the long haul. People forget that it is not merely a road to fame and riches,” says Abheet. As Bharath puts it, underlying every decision made by the band is a laser focus on their intent and their goals. They never lose sight of who they are and why they do what they do. Consistency and honesty are among their core principles as a band and it has clearly paid off. The band’s approach to songwriting has also taken on a more collaborative approach. Importance is given to their authenticity and how cohesive the batch of songs are.

The band members remain unfazed at the growing trend of clickbaity, playlist curated music and the drive to churn out tracks every week lest they be forgotten. In an era of vast catalogues with fleeting shelf lives, their ethos of “bringing back the sound” prevails. The band members, however, do acknowledge the importance of the hustle culture in order to reach whatever goals you set for yourself – even one as ambitious as wanting to make it as a musician. Abheet, who is a serial entrepreneur in his own right observes, “There is no excuse to not consistently put out content – even in the scenario of a global pandemic”.

However, this level of honesty comes at a price. All three members of the band engage in a plethora of other activities to pay their bills, stay relevant and grow as artists. Bharath and Anirudh conduct guitar classes through the week and each of them has around 40 students. They also take up session work, film-making and Abheet also runs multiple creative agencies.

Cinema of Excess’ greatest strengths as a trio lie in making the most out of their minimalist setup, relatable lyrics and composing sweet, ear-worm melodies. All of these attributes are set to culminate in their upcoming work which we await with bated breath.