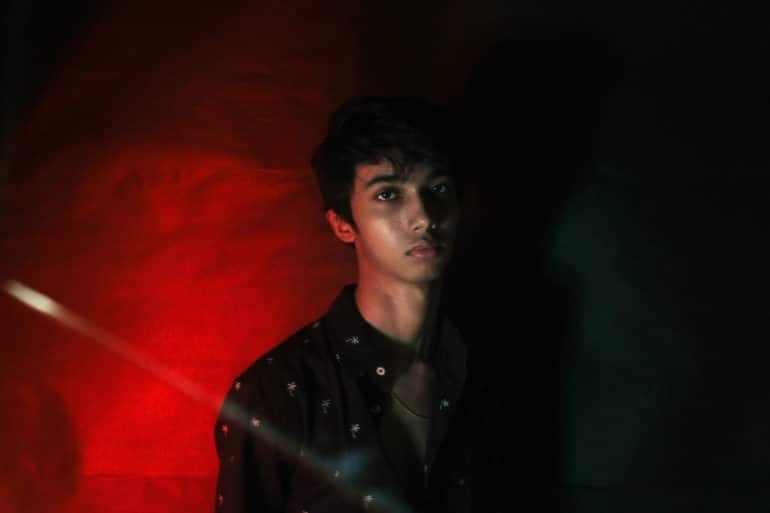 Chrms talks socks, Flume and what it takes to be original

“Socks are my thing yo. Gotta stay fresh & take the drip seriously,” says eighteen-year-old chrms when prompted with a rather innocuous question regarding his foot fashion choices. Veer Kowli is the name behind chrms, the young producer pioneering India’s future bass sound. Based out of Mumbai, Veer’s SoundCloud has racked up a few hundred thousand in streams. Veer has loved experimenting with design, film, and music and has been producing since he was nine. His highly anticipated debut EP Lover Boy has dropped in 2019, a rich showcase of his ever-growing artistic sensibilities and production quotient.

The leading inspirations behind the new record have been akin to Veer’s personal experiences. Borne of relationships, developments, and changes that consumed Veer in the recent past, said happenings have provided him with the gentle prod that he needed. Lover Boy was in the works for nearly two complete years. “I took my time with my debut record because I wanted it to mean something to me and have a voice of its own,” says Veer. He faced many a creative block, sometimes months together of not being able to make tangible progress. It was his sheer commitment that drove the project to completion. “What kept me going was the vision and how badly I wanted to bring this record to life.”

The 7-track release clocks in at a little under a half-hour. The EP brims with iconic start/stop breaks interwoven with chopped up vocals, lush synths and a big smattering of cool. The melody on opener ‘Jadu’ was something Veer made roughly three and a half years ago. “I held on to it because I knew it was special, but I fooled around with it and made an ambient/orchestrated 10-minute track called ‘This Feels Like Home’ with the same melody and released it on SoundCloud a couple of years ago,” he adds. His most favourite track from the record is ‘¿?’ (double question mark). “I think it resonates with me right now because of the phase I’m going through in my life as we speak. It’s definitely a special one,” he says.

Three out of seven tracks on the EP incorporate vocal features. When prompted about his work ethic, “I always prefer collaborations in real life over virtual sessions. Although I don’t mind taking our time with it and working over Skype, getting in the studio to jam with a friend is just easier,” says Veer. Most cases of vocal collaborations have followed a similar workflow. He has a track that needs another layer (preferably a vox one), the collaborator hops on the tune, they record together and jam it out until both parties are happy with the end product. All three collaborative tracks on the EP, ‘Mind’, ‘¿?’, ‘Bone Soda’, was recorded in Veer’s bedroom studio with Sabu, Jordy, and Rae respectively. Veer hasn’t shied away from dabbling in some himself. All the vocal bits on ‘What I Want’ were entirely his vocals.

Chrms just might be the biggest Flume fanboy yet. When romancing the idea of a potential Flume concert in India,  “It would be an absolute dream to get to open for him. I’ve been looking up to this guy and his sound/aesthetic for years, and he’s one of the reasons why I started doing what I do,” he says. The Australian producer dropped his much-awaited EP just three months prior to Chrms’ debut. “I absolutely love the new mixtape. I still listen to it every day. Personally, I think it’s creativity at its finest,” he pipes.

Veer has been inspired by many contemporary artists of the likes of Flume, Porter Robinson, Oshi and Mr Carmack. On the homegrown front, Veer enjoys producers like Yung Raj, Lifafa, Dropped Out, Kreon, Zzz, Robu. Palpable as they may be, it can be a tricky decision, approaching one’s sound in a manner that retains originality while sounding familiar and fresh. “I guess the way I go around it is, I forget about all the barriers, genres, artistic influences, and just try to convert my thoughts into audio files. The musical influences should leak into the sound and packaging automatically,” he says.

Out on his first nationwide tour, Veer has already hit Pune, Mumbai and Bangalore with the live show. “I am so stoked that I get to play out the live set I’ve been building – one hour of all original music from the record. It’s been an overwhelming couple of weeks since the announcement of the EP, and I don’t know what’s next for Chrms, but I’d like to keep doing what I’m doing.” Veer also sees some visual art projects in the pipeline.