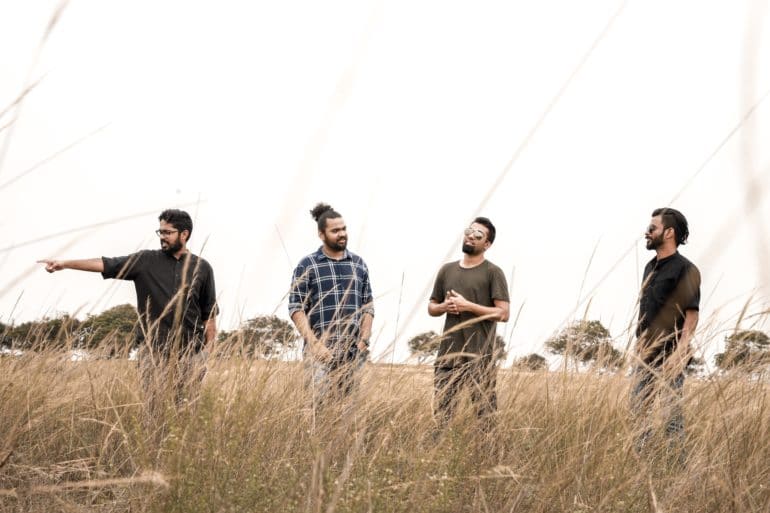 The sheer vastness of the present musical landscape, buoyed by that good ole internet, encourages artists to think a little outside of themselves to occupy a cosy corner within. Instrumental music is not new, and there a plethora of examples to cite the same. While it may be too broad a brush, the peripheral strands include the more far-out attempts at becoming the gold standard. Yell out ‘instrumental guitar music’ at a public place, and after being told to stop yelling, the replies are varied: John Mclaughlin/Mahavishnu Orchestra, Godspeed You! Black Emperor, or more palatable acts like Mogwai.

Jatayu emerges from this very same pile: a band formed by lead guitarist and frontman Shylu as a bedroom project in 2016 with a tendency to lean on to Carnatic stylings sprinkled on a prog rock base. The EP Chango Tales catalogues “the human experience through a protagonist named Chango, detailing the many facets of said experience such as love, passion, the nature of curiosity, pain, anguish and contentment”.

When asked about the band’s formation to its current lineup, Shylu says, “I wrote a few Konnakol based tunes, randomly jamming them with my percussionist friend. Later we wanted to expand these ideas, and that’s when I was introduced to Sahib Singh (guitars). We were interestingly on the same page, so we were clear on how Jatayu had to sound. Finding the right people to work with is always a touch of luck. So, after months of this process of trying different people out, we brought in Kashyap Jaishankar (bass) and Manu Krishnan (drums/percussion) at the right time. You know you have met your band when the jams become exciting and ideas keep flowing.” And there was no looking back from then on.

The band members are an experienced bunch, having played for numerous Chennai bands in the past. This begs the question of influences; everyone’s dipped their toes into opposing styles at some point. When quizzed about this, Manu quips, “We don’t draw lines between Carnatic, metal, jazz. It’s meant to be more of a medley, an audio representation of stories we’d like to tell. Not one of us has ever done anything similar to what Jatayu is currently doing. We just add a little bit of our personalities to everything we try, forcing us to continuously adapt. Some of the artists that we listen to on our road trips are T.M Krishna, Lalgudi Jayaraman, Mahavishnu Orchestra, Weather Report, Robert Glasper, Mac Miller, Yusseff Dayes, Meshuggah.”

Instrumental acts are generally mistaken for lacking a vocalist, their songs structurally different for that very reason. There is more brought to the table, as the instruments have a lot more to say individually than within the confines of the pedantic verse-chorus. However, the more Indian it potentially sounds, greater is the chance of shoehorning the dreaded “fusion” term into its description. “The word itself has lost all meaning. It initially started off as fusing two different genres because genres were meant to be separate and fusing them meant you were somehow breaking the norms and trying something new,” says Sahib, a whiff of resentment in the air. He clarifies, “It’s a term that just helps people connect the dots in their heads about what to expect from the music; we struggle to put a tag on our style of music. We just go with what helps reach more people and get them to listen to our sounds. Once they listen to our music, our objective is achieved. They can perceive it however they like.”

The advantages of playing in a band armed with this sound include the interest of an affluent diaspora, a clutch of folk grasping tightly at their roots. Sharing its name with a much-revered deity of the region, Jatayu found itself playing a show in Malaysia a few months ago. Weighing in on the differences between audiences, Kashyap sighs, “Gotta disappoint you here, it was a predominantly Indian audience. So it mostly felt like we were playing at home. We were the opening act for this festival, and we think the audience was expecting a more commercial sound, so I guess it took them a little bit to get what we were doing.”

With elaborate song structures forming the fulcrum of their sound, songwriting is assumed to be a malleable process. Kashyap adds, “Sometimes, it’s a complete melody, or a small idea that someone brings in that we spend a lot of time jamming over before we collectively decide that it’s complete. Some take months. We try not to stick to a formula, and our mentality is to service the song, and not ourselves. There may be solo sections in the songs and all that, but they exist with intention and purpose.”

Jatayu is currently traversing through North India promoting Chango Tales. With a sound that may cater towards traditional sabhas, Jatayu has gone a little left of centre and turned its sights on to performance venues, having just finished two gigs at the Piano Man Jazz Club and Home, respectively. The tour continues through Gurugram, Hyderabad and ends with two gigs in Mumbai towards the end of July.

You can find Jatayu’s Chango Tales on all streaming platforms.