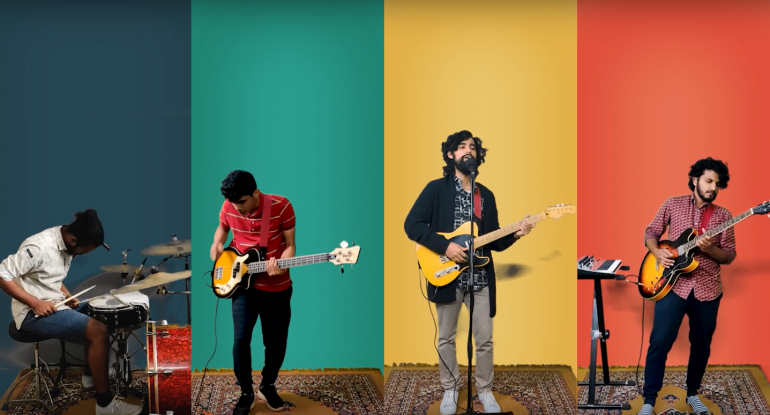 Black Letters look back at their album, and revisiting their songs with a fresh and organic visual rendition

Black Letters, one of Bangalore’s most prolific alternative outfits, is back with an all-new music video for their track, ‘Some Do, Some Don’t’. Taken from the band’s 2019 album Still As You, the video has the group translate the electronic elements of the track to a fresh, more organic rendition. These visuals are the newest in a string of more lighthearted and fun performance videos of reworked tracks that the band have been posting on their socials.

Revisiting the songs from Still As You, which married dreamy electronica with their rock roots, allowed the Kochi four-piece to get back to basics. It let them zen out with their favourite instruments and be in the moment with one another. “Taking these songs to jam rooms needed a lot of simplifying, refining and restructuring. This sort of approach raised our hairs. We felt like that was the way to go,” says vocalist-guitarist Sharath Narayan.

With the album having completed a year recently, they continue to look back on it with pride. “I think it was a big risk that we wanted to take, in terms of jumping and mixing genres and not caring how our existing listeners might receive it,” he adds. It paid off, as the release took their sound in a rather unexpected, but very promising direction. While they have always straddled genres, this step proved that they were much more than simply an alt-rock group.

The pandemic set them back in several ways, but it also was an eye-opener. They had a recent reshuffle in their line-up, with Harikiran Menon stepping in to replace bassist Jeevan Antony. “Hari was already a full-time member of the band and the transition to playing bass was quite natural for him. His playing has been really influential in how the new record is coming along,” says guitarist Sarang Menon.

For now, Black Letters’ goal remains to work harder, focus more on their music and work individually on their craft. A new record is currently in the works, slated to be released in March 2021. “We are hopeful about 2021, of releasing more music, videos, and touring”, says Menon. Fans can also expect solo music from him, Narayan and Harikiran.

The artists remain tight-lipped about the sound of their upcoming project, but they tease that it will recall some of the more cerebral feel of Still As You. “We’ve been having so much fun writing music together again, that’s all I can say at this point,” Narayan says. More collaborations are also in the pipeline, perhaps with some of the stellar musicians roped in for the Still As You Remixes album.