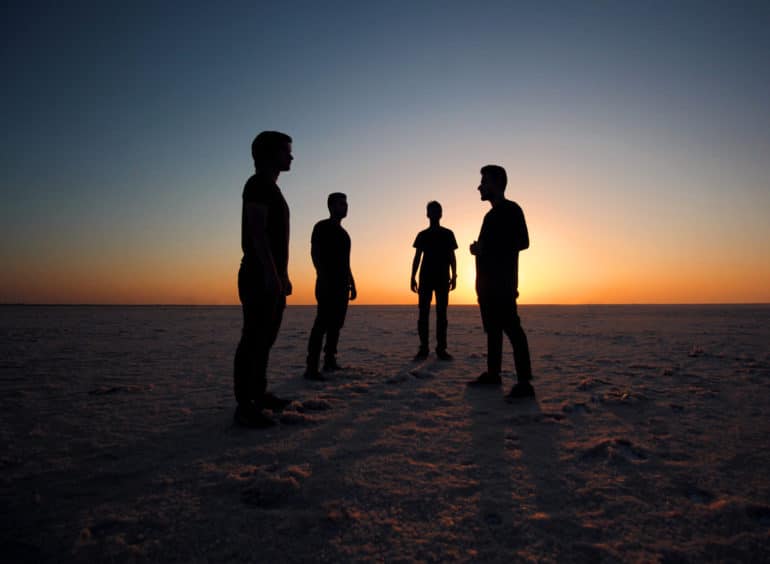 Aswekeepsearching on the release of their Weekender 2017 live performances

Monochrome flags wave throughout the crowd at the Bacardi Arena at Weekender in Pune. It’s quarter to 5 pm, but the sun is still blazing at the thousand-odd people who have assembled to watch Aswekeepsearching.

Over the next 50 minutes, the modern post-rock band from Ahmedabad enthrals the audience with their sophomore album Zia, which they released earlier in May 2016. The crowd’s roar after each song, the flags keep on waving, and multiple cameras operating both on and off the stage, capture each riff and exclamation.

For those who missed it, Aswekeepsearching released performances of their Weekender sets in Shillong and Pune on their YouTube channel.

“We have never released anything like this before, capturing audio and video of the complete set. So for the ones who have never attended our live shows, it should be a treat,” said Uddipan Samrah, guitarist and the lead vocalist of the band.

According to Samrah, the plan to execute such an idea had been there for a while, but the band was waiting for the right show.

“Having a full live set with percussion and violin, it made complete sense for us to capture it. YouTube is full of such concert videos. But I guess, not many Indian acts have thought about doing it”, he adds.

“Both him (Ajay Jayanthi, violin) and Sambit (Chatterjee, percussions) are great musicians and performers. They go so well with the band. Since both of them contributed to our album Zia, it made complete sense for us to have them on stage”, said Samrah.

Aswekeepsearching has been continuously touring the country since the launch of the album, initially conducting a four-city tour to launch Zia. The quartet went to Pune, New Delhi, and Bangalore, before concluding in Mumbai. Before that, Samrah visited dozens of cities across India, hosting listening sessions of the album before its release, and collecting feedback from those who attended. Currently still on tour, the band says they love touring. However, it takes its toll. “The hardest part is to see the same faces every day. We are tired of seeing each other”, quips Samrah. Covering regions from Trivandrum in Kerala to Ziro in Arunachal Pradesh, the band has played across various tier-2 and tier-3 cities. “It was intense, but that’s what we live for – to play our music live”, he says.

The band also enjoys a modest international following and have already played a tour in Russia. Rather than pumping the sales and numbers, it is currently focussing on creating a solid fanbase. “It’s just six months”, Samrah says. “I often see people wearing our t-shirts at our gigs, or even in other concerts.”

Even with the constant touring, the band members are always working, as can be observed in the snippets of tracks and samples they keep uploading on their social media. Moreover, almost half the band (Deb, Alex, and producer Adhiraj Singh) is involved with the metal band Noiseware, which just released their debut album Clouds At Last.

Could we see a third album anytime soon? “2018 will be too early considering we are really busy. We keep writing new music, so let us see when we can release some”, says Samrah. “But for now, there are two albums, and we need to play more new places.”