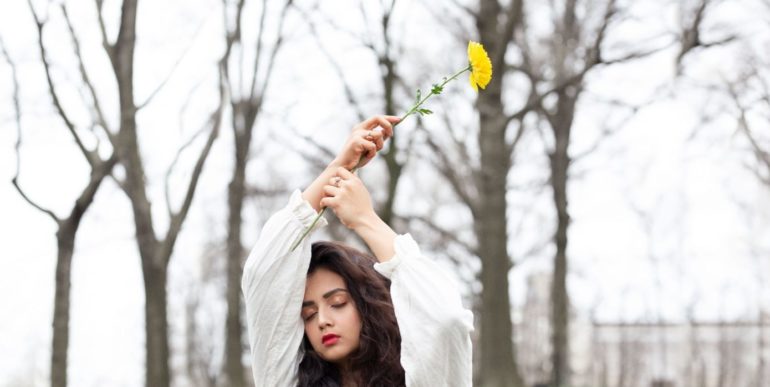 Abhilasha Sinha describes her musical journey, her upcoming tour and making it in the industry

Why the sound of singers harmonising sounds so tantalising is anyone’s guess. It could be its understated epicness, its introverted exhibitions of grandeur or even its melodious rendition of the most chaotic chasms of the human psyche. An hour-long conversation with New Delhi-based singer-songwriter, Abhilasha Sinha lends itself to such contradictory juxtapositions. Let’s not kid ourselves – pop music is nothing without the artist behind the microphones and their story. Much like the iconic contraption in A Clockwork Orange, the most sugar sweet and bubblegum pop music have an uncanny way of holding your attention.

“For every track that I am proud of, there are at least 10 that don’t see the light of day,” says Abhilasha Sinha. She describes her music as “forever work-in-progress, sunshiny and sad love ditties”. While this is certainly true, multiple listens of her fleeting 3-track discography unveils a surprising amount of depth to her compositions (even the ones she wrote in 15 minutes). From the epic and elaborate instrumentation on ‘Hold Your Pride’ to the soothing vocalisations on ‘Tum Ho Yahaan’, her love for harmonies and melodies bleeds into every aspect of her songwriting and approach to music production. Her songwriting proficiency in English, as well as Hindi, and a transparent approach to ongwriting features a stream of raw emotions and observations – a testament to her claims of having conjured up the lyrics in short spans of time. However, there is a lot that goes on behind the scenes of the conception of every track. Apart from exorbitant recording expenses and other running costs, Abhilasha admits that her songs would not have been nearly as captivating as they are if it weren’t for the many music producers, sound engineers, instrumentalists and other collaborators who contribute ideas to her music.

“There was a point where I had a 16-hour corporate job and I couldn’t find time for anything else.I had to really push myself and encounter plenty of dead ends before I was able to do what I wanted to.”

She recalls her first brush with music back when she was about three years old when she would sing simple bed-time tunes with her mother. Eventually, her musical renaissance as a young adult involved her voracious consumption of everything from Britney Spears to Iron Maiden. This eclectic taste in music and an early fascination with harmonies and melodies form the core of every tune under her belt. However, her life path as a musician was on a brief hiatus when she endured multiple tedious corporate jobs and watched as her passion for singing and songwriting slipped through her fingers. Switching jobs while trying to nurture her passion only strained her financial and emotional well being. Eventually, having decided that a career in music is what her life has always been leading to, she decided to take a course in Music Business at NYU.

The influence that this experience had on her career is unmistakable and shines through in her approach to most questions. Abhilasha Sinha’s musical and creative talent make up only a mere half of her success story. Her deep and incisive insights into the minds of the industry and music consumers at large form the basis of many of her career choices. This includes her knack for choosing the right collaborators, her calculated predictions of where the industry is headed and her vision for creating commercial and accessible music without sacrificing its artistic qualities. With her newly acquired knowledge, she began to foray into the music industry boldly. Through the art of networking and collaboration, she found early success in the trip-hop group No Honey and the folk trio River.

“I wish people stopped calling River an all-female band. People should differentiate artists not on the basis of gender, but on the genre”, she laments in the middle of an insightful discussion on the rampant presence of sexism and discrimination in the industry. While it is true that more women have been achieving success in the industry than ever before, there still exists a disparity when it comes to opportunities for women and the pervasive mildly sexist mindset of both the audiences and people who call the shots in the industry. In an environment where music is generally viewed as a companion to Bollywood movies and female singers and their craft are mostly commodified, making it to the top is a Sisyphus task – from the studio to live performances.

“It is important never to forget that music, politics and social change go hand in hand. Now is the time for everyone to reflect on their craft and its socio-economic impact. We have a responsibility to have a voice and to espouse progressive thoughts to make the world a better place,” she says. Under Abhilasha’s whimsical, liberating and infectious personality lies a throbbing passion for her craft and a simple set of guiding principles etched in stone. These strong fundamentals are in full display all over the three tracks that dropped recently.

Her debut tour titled, Labours of Love kicked off on July 21 in Delhi and is set to span many major cities across India over the next few days. Like any tour, pulling it off involved the sweat, blood and tears of multiple people. The tracklist consists of the three songs as well as some unreleased material which was supposed to be part of a Labours Of Love EP which we may see in the near future.

Abhilasha Sinha’s bold leap into the vast realm of music is both captivating and inspiring. She encourages aspiring musicians to not only be themselves and persevere but also try their best to understand what they’re getting into. It is a no brainer for anyone trying to break in needs to have an understanding of the nuances of marketing and what makes music successful.