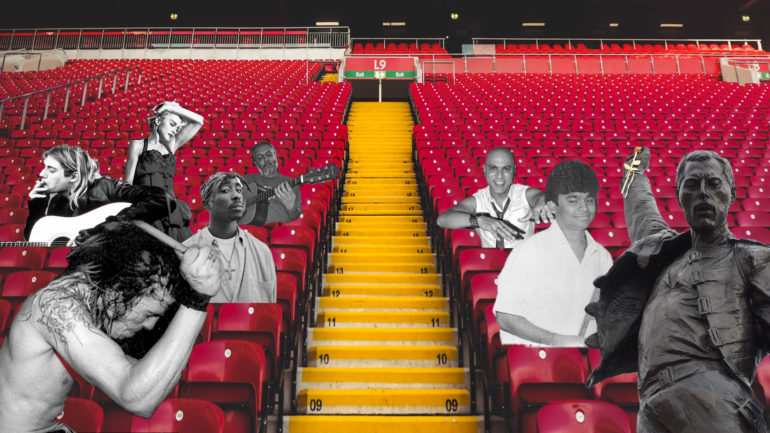 Rewind with the Reds: here’s how the music world was, last time Liverpool lifted the league

As Willian slotted in the penalty for Chelsea against Manchester City on 25th June, Liverpool players and fans around the world knew that they were minutes away from history. This was a moment that had eluded them for generations and the ongoing Covid-19 crisis had stretched the wait even further. But as the final whistle blew at Stamford Bridge, all those who had walked together for Liverpool were now ready to paint the town red. Liverpool had won their 19th English League title after 30 excruciatingly long years!

The last time Liverpool were named Champions of England was way back on 28th April 1990. But while Kenny Dalglish’s lads played some phenomenal football to win the league, what was playing in stereos, walkmans, radio stations and TV sets of music fans back then? Hop aboard a musical time-machine as we take you back to that summer of 1990.

Here’s a glimpse at how the world of music looked like across the globe and back home in India, last time the Reds went marching.

When Liverpool last won the league:

1990 was the year of Aashiqui. Arriving towards the end of 1989 and building up to the movie’s release, music composer duo Nadeem-Shravan saw their work catapulted to nationwide fervour. The soundtrack supposedly still stands as Bollywood’s biggest-selling album and was definitely being blared loud in stereos across the country in the summer of 1990 as Liverpool fans in India cheered “You’ll Never Walk Alone.”

While rumours were rife that the King of Queen was suffering from AIDS, the showman had kept all curtains closed on this news. In February of 1990, Mercury along with his Queen mates went on-stage to collect the Brit Award for Outstanding Contribution to Music, albeit looking really frail. It turned out to be his last ever public appearance before AIDS-related complications led to his demise in November next year.

Now considered pioneers of the Indian indie scene, back in 1990 Indian Ocean had a name but no takers. Over a brainstorming session for band names at founding member and guitarist Susmit Sen’s house, his father suggested “Indian Ocean.” The beloved name was found but it wasn’t after an unheard demo tape and a few years of wait that Indian Ocean released their self-titled debut album in 1993.

Dave Grohl was yet to meet Kurt Cobain

In the summer of 1990, a young lanky long-haired Dave Grohl was performing drum duties for the hardcore punk group Scream. It wasn’t until September that year when Scream disbanded did Grohl reach out to his friend and frontman for the Melvins, Buzz Osbourne for help. Buzz gave him the contact of a certain Kurt Cobain who was looking for a drummer for his band in Seattle.

Tupac Shakur was a dancer

Had you ever stepped in to a Digital Underground gig in 1990, you might have spotted an 18-year-old back-up dancer in their crew by the name of Tupac Shakur. Known as MC New York then, Pac had recently joined the California-based rap crew. The aspiring poet was finally given his chance to rap on Digital Underground’s single ‘Same Song’ in early 1991. It was then that he then came up with the name 2Pac.

A.R Rahman was yet to become a film music composer

In Madras (now Chennai) of 1990, Rahman was a coveted name in the advertising circuit for his compositions and jingles. Supposedly it was his composition for a Cinthol ad that convinced filmmaker Mani Ratnam to offer Rahman a chance to score music for his film. The Mozart of Madras finally debuted into the world of cinema with Ratnam’s Roja in 1992.

In April 1990, Sinead O’ Connor was celebrating her career’s biggest hit, thanks to Prince. The Irish singer-songwriter’s rendition of the Purple One’s 1985 track ‘Nothing Compares 2 U’ went on to be a rousing ballad popular across borders. The track topped the song charts in America and 12 other countries.

Baba Sehgal was the only Indian rapper on record

While rap music may blare from gullies, clubs and homes across India’s pin-codes today, back in 1990 it was still unheard of. It took a debut release from an electrical engineer turned emcee to introduce desi rap to India. Dilruba, the debut album from Baba Sehgal, arrived in March 1990 as arguably India’s first rap record.